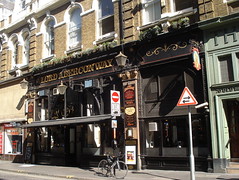 The decor is smart-traditional, with a hardwood floor, lots of dark wood, and chandelier-style lighting. The seating wraps around the edges of the room, with standing space around the bar. Pillars break up the space, giving several little separated-up areas rather than one large space. A couple of booths nestle at the back, and an ornate staircase spirals up to a mezzanine seating area. Large windows let in plenty of light.

Kake visited on a Monday afternoon in September 2014. There were several other customers in at 2:30pm, in small groups of two or three. Music was playing very quietly.

Accessibility: No steps to get in, just a slightly uneven threshold. Six steps with a sturdy handrail on one side to the gents', four more without handrail to the ladies'.