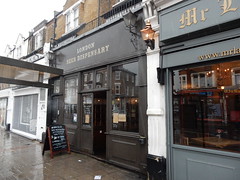 Pub in Brockley. It was previously run by the Late Knights brewery, but changed hands in August 2016.