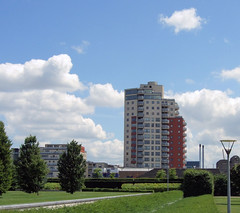 An area of Docklands, comprising a thin strip of land sandwiched between the Royal Docks and the north bank of the Thames.

It has three major green spaces - [Lyle Park]?, [Thames Barrier Park]?, and [Royal Victoria Gardens]?. It used to have a museum, the North Woolwich Old Station Museum, but this closed some time around the beginning of 2009. It's also the location of London City Airport.

River crossings are provided by the [Woolwich Foot Tunnel]?, the Woolwich Ferry, and the DLR link between King George V and Woolwich Arsenal. This branch of the DLR runs the length of the area from west to east.

The eastern part of Silvertown, around the Woolwich Foot Tunnel and the Woolwich Ferry, is sometimes referred to as North Woolwich, although it's on the other side of the river from Woolwich proper.

Auto-generated list of things in Silvertown (view them on a map):