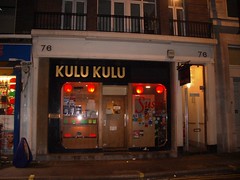 It has a bit more character than the usual conveyor belt places such as Yo! Sushi and Itsu; there's more interesting stuff, and a wider range. You do sometimes have to be quick to decide  on our visit, oysters came out at one point, and I thought "mm, oysters, will grab some of the next batch" because I already had a bit of a queue; needless to say, they didn't come out again while we were there. I like this, though; it makes it feel a lot less samey, a bit more of an adventure.

Highlights include the agedashi tofu (deep-fried tofu with spring onions in a soy-based sauce), and the seaweed salad with sesame seeds and chilli. We spotted two kinds of handrolls; salmon skin, and avocado/tempura prawn. As well as the more suspect kind of gunkanmaki (something that looked like prawn cocktail, and something else that obviously involved canned tuna), tobiko (flying fish roe) and ikura (salmon roe) were also in evidence. They also have all the usual suspects  tuna nigiri, salmon nigiri, tuna rolls, inside-out rolls, California rolls.

It's not somewhere for a romantic date  the (free) green tea is dispensed by means of a hot water tank, a box of teabags, a shelf of mugs, and an invitation to help yourself; and it is pretty small (maybe 30 places around the conveyor belt, if that); and they do have notices up stating that the maximum stay at busy times is 45 minutes  but if you're after somewhere central to get some interesting food with friends who live in disparate corners of London, you could do a lot worse. We paid £25/head for four people, including a beer, a bottle of wine, and a "reaching 20 plates is a challenge!" Bob.