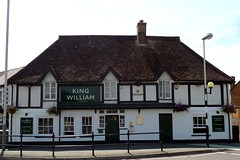 On Easter Sunday in March 2007 the front of the bar was full of people; quite a few watching the football and what seemed to be a large family get together. However the back room, which can seat 30, was empty. In the back room there was music playing quietly.

In March 2007 bob had a cumberland sausage with mash (£6.25) and some onion rings photo. The sausage was very tasty although the gravy was a bit too hot. In April 2019 bob had duck pad krapow (£8.50) photo, which was decent enough but perhaps not spicy enough for bob's taste.

Child-friendliness: They have at least one highchair with tray.

Accessibility: A large step to get in. It's level once you're inside, but some of the ceilings and doorways are quite low and the gents' is quite cramped.