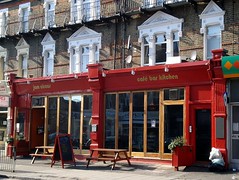 Pub/bar in Brockley, near Crofton Park Station. It's part of a small chain of pubs run by Antic.

A 250ml bottle of James White organic pear juice was £2.50. They also have various booze on tap, including Stowford Press cider.

Not entirely sure what times food is served, but I have a "Monday sarnies" menu here which says sandwiches are served noon-3pm and are also available to take away. They're priced between £2.80 (peanut butter and jam, or cheddar and pickle) and £3.80 (smoked salmon, black pepper, and rocket). A "handful" of fries is an extra £1, and everything except the peanut butter sandwich is also available in a baguette for 30p more. The only non-sandwich option is butternut squash soup with bread (£3.70).

They have free wireless internet - ask at the bar for the password. It works fine (this update is being made from the Jam Circus itself). Live music on Sundays from 8pm, according to a board seen outside in February 2008.