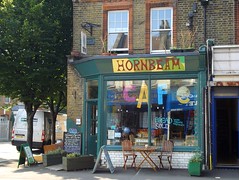 The community centre that houses the cafe was opened by local activists in 1992, and it continues to be run with volunteers. The kitchen is run by a group called Norman Loves, and offers a small (3-4 dishes) and frequently-changing menu of vegetarian and vegan food, including breakfast. The vegetables come from the OrganicLea growers' co-op.

The decor is cheerful and cosy. A sofa and easy chair near the door are flanked by a low coffee table, and the rest of the space is filled with upright chairs and tables seating around a dozen people. A noticeboard is covered with posters and flyers advertising local events, some of them (such as a knitting group) taking place within the cafe. There is free wifi.

Kake and friend visited on a Wednesday lunchtime in August 2010. When we arrived around 1pm, there were a couple of free tables, but these filled up during our visit. Service was a little haphazard, though this is possibly because we were there at the peak of lunchtime trade. My gado gado (£4.75) photo was quite tasty, consisting of cooked potato and cauliflower along with raw carrots, tomatoes, cucumbers, and leafy greens; the peanut dressing had a pleasing consistency too. My friend was a little less pleased with her polenta and mixed vegetable pie (£4.75 including three salads) photo, finding the choice of vegetables not entirely to her taste and some of the leaves in the green salad a little bitter, though she enjoyed the polenta, the accompanying new potatoes, and the tomato-cucumber salad.