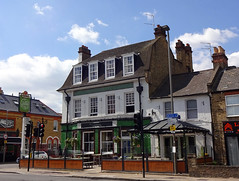 The main bar area is relatively large, but much of it is taken up by the large central island bar. An eclectic range of seating is distributed around the sides of the room, including wooden chairs and low stools around a long communal table, tall wireframe seats at high tables, and an extremely colourfully-upholstered sofa. The floor is scuffed boards, colourful lampshades dangle from the ceiling, and the walls are covered with at least three different patterns of "quirky" wallpaper.

Off to one side is a dining area ready set with cutlery and napkins. There's a flagstone patio out the front next to a rather busy road, with picnic benches as well as low padded armchairs under a glass cover. At the back is a small astroturfed courtyard space, again part-covered.

Kake visited on a Friday lunchtime in May 2019. Arriving at their opening time of noon, I was the first customer of the day by mere seconds, as another arrived almost immediately and three more turned up ten minutes later. Music was playing, relatively interesting, not too loud.

The handpumps were clipped for Young's Bitter and Young's Special. A pint of lime and soda was £1.30.

Dog-friendliness: Dogs seem to be permitted, as there's a jar of treats for them against one wall.

Accessibility: No steps to get in. No steps to the toilets, and the doors on the ladies' cubicles open outwards. A step to the back courtyard.