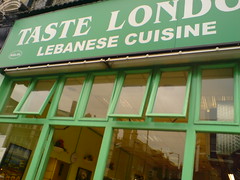 This is a Lebanese cafe and takeaway on Camberwell Church Street.

secretlondon went there in April 2008 and had lamb shawarma. It looked a bit like donner kebab but the staff were very keen to tell me that it wasn't. Taking it home I can confirm it was much better and with completely different seasoning. I also heard people in August 2008 raving about a new place that did wonderful falafel. This turned out to be the same place!

secretlondon went to eat here in September 2008. She had a falafel starter photo , mixed shawarma with rice and salad photo, and arabic tea photo .

Information on opening times etc taken from leaflet from September 2008.