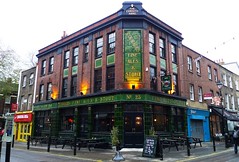 It changed hands in late 2011 and is now part of the Barworks group. A simultaneous refurbishment revealed the nice old green Courage tiling on the exterior.

Inside, it's a single room, though traces of its history as a two-room pub remain: there's an obvious joist at one end of the bar where the dividing wall was removed, and one of the sets of entrance doors still bears the legend "Saloon Bar". The green glazed Courage tiling remains around the bar, as does the diamond patterned stained glass at the top of the windows photo. Floorboards are bare but varnished, and stools line the bar photo. Three half-height booths sit alongside an exposed brickwork feature wall photo.

They have several real ales on handpump and keg, and also have an extensive menu of bottled beers photo. They have free wireless, though you have to register (which is also free).

Kake and bob visited on a Sunday early evening in September 2013. It was quite full; there were a couple of free tables when we arrived around 5pm, but none half an hour later. Music was playing loud enough to get in the way of conversation, and with the pub full of people talking, the end result was unpleasantly noisy.

They do food, which Monday to Saturday is focused on sliders (small-size burgers), though on Sunday the sliders are replaced by various roast dinners menu photo.

bob had the burger with pulled pork (£10, plus an extra £1 to have it with bacon) photo. The pulled pork was a bit chewy and dry, and the bun fell apart fairly quickly. The accompanying skin-on chips were good, though.

Kake went for the grilled wild salmon served with roast potatoes, honey and thyme roasted carrots, parsnips, Yorkshire pudding, and broccoli mornay (£12.50) photo. Despite the impressively browned crust on the salmon, it wasn't overcooked; and instead of the gravy threatened on the menu, it came with a much more appropriate garnish of cream laced with sauteed onions. The roast potatoes and parsnips were a little hard and dry, but this could be because we were at the end of lunch service. The broccoli was cooked fairly soft, which Kake likes, but may not be to everyone's taste.

Accessibility: A fairly steep ramp to get in. Booth seating is up one step, but the rest of the seating (and the bar, and the accessible toilet) is on the level. Other toilets are down a narrow flight of stairs with a bend at the top and a slightly wobbly handrail on one side.