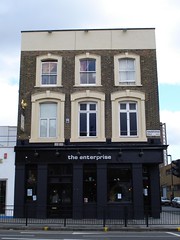 When doop and Juliet visited in April 2007, there was Young's bitter available on handpump, but on a later visit by Kake, Kat, and others in September 2008, this had been replaced by Bass. Strongbow was £3.20/pint (September 2008).

They seem quite keen on their music: there's usually something guitar-based playing, and they have quite a lot of events on; the pub even has its own Myspace page. On our Friday evening visit in September 2008, the place was full to bursting and the music was turned up loud enough that even shouted conversation was quite difficult.

There are a couple of seats outside, but only in good weather as there's no shelter. They have WiFi: you need to ask someone behind the bar for the password.

Food is served in the evening at least; see photo of the menu as of September 2008, which includes bangers and mash made with several types of specialist sausages.