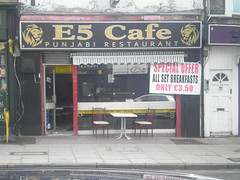 The E5 Cafe (previously the Workman's Cafe) was a greasy spoon cafe on Chatsworth Road in Clapton. It has now closed. As of April 2014 the premises were occupied by a small Italian restaurant called Prima o Poi photo.

Greasy spoon cafe on Chatsworth Road in Clapton. Previously known as the Workman's Cafe photo, though the menu and prices remained the same after the name change. Despite the signage for "Punjabi restaurant" on the frontage, as of early 2014 it doesn't appear to do any Punjabi food.

This cafe has seen Chatworth Road go from unremarkable to gentrified in a matter of years. Like the handful of newsagents and poundshops amongst the creperies and deli-shops, the E5 Cafe fits right into the random clutter of the street.

Breakfast set menus include toast and coffee or tea, and there are four vegetarian combinations. In April 2012, egg, veggie sausage, beans, tomato and hashbrowns were £4.50, with the most expensive breakfast being the 'Mega Breakfast' at £6.50. They also had various mixed grills for £6, paninis for around £3 each, basic sandwiches around £1.50-£2.50, roast dinners for £4.80, children's menus, and a small selection of desserts.

Service is friendly and the cafe is bright, clean and pleasant.