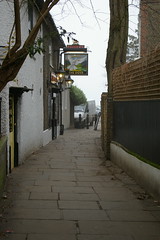 Note: Due to a kitchen fire on 21 June 2009, the Dove closed for about a week and then reopened but without a kitchen. We're not sure if they've started serving food again yet.