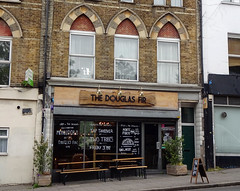 They don't serve food (apart from bar snacks), but on Wednesdays 5.30-8.30 a pizza van is parked outside.