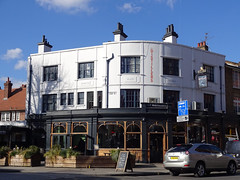 Fuller's pub on Fulham Palace Road, near Hammersmith Station. According to the Feb/Mar 2014 London Drinker magazine, it's been a Fuller's pub since 2013.

The interior of this large corner pub is broken up somewhat by dividing walls and narrow pillars. The decor has mock-industrial touches, such as an exposed brickwork feature wall, distressed wood flooring, and oversized "bare bulb" lighting photo. A few interesting original features are retained, including stained glass detailing and mouldings at the tops of the pillars.

Much of the seating is on generously-sized banquettes, though a few freestanding tables and chairs are available too, with a fair bit of space is left clear for vertical drinking. Real flower buds sit in Kernel Brewery bottles on the tables.

Another room upstairs is used for live music and open mic nights. There's also a patio-style beer garden to one side, with covered booths photo, open noon-9:30pm every day as of February 2016.

Kake visited on a Tuesday lunchtime in February 2016. There were a handful of people in when I arrived a little before 2pm, some of them just finishing lunch. Music was playing, not too loud. Service was friendly and enthusiastic.

There were five real ales on the handpumps: four from Fuller's (Seafarers, London Pride, Oliver's Island, and Jack Frost), and one guest (Stod Fold Blonde). They also had a fair few keg taps including Fuller's Black Cab stout. A pint of lime and soda was £1.30.

There was also a real cider on handpump (Nell Gwynne), and several more on gravity behind the bar, the remnants of a recent cider festival. According to a member of staff, they have a bit more freedom in ordering drinks than your average Fuller's pub, and they have their own specialist independent cider supplier.

Accessibility: No steps in at the main entrance (though doors are somewhat heavy). Accessible toilet with pull down baby change on ground floor, and the ladies' is on the ground floor too. Gents' toilets are on the first floor.