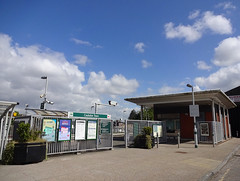 Previously known as Smitham Station, the name was changed in May 2011 to better reflect its location.

Trains run to Tattenham Corner and London termini at least twice an hour, and four times an hour at peak times, since some trains then terminate and reverse here.

The station is in the centre of Coulsdon, and is particularly convenient for the local branch of Waitrose, which is opposite the station approach road. The passenger footbridge was replaced in mid-2007 with one containing lifts, giving full access to both platforms.