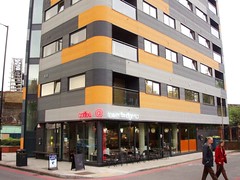 A coffee shop and cafe near Tower Bridge, which has now closed. This branch was one of the first to close down, but the entire chain went into administration around the start of 2009.

As of March 2012, the Tower Bridge premises are occupied by a Japanese restaurant called Wawa.

The information below is retained for people who want to know what it used to be like as Coffee@.

An elongated room on the ground floor of a strikingly modern apartment building clad in orange and grey corrugated iron, the interior matches the outside. There are a handful of small (almost too small) tables as well as some sofa areas.

The coffee is perfectly good. They have some tasty pastries (the usual range of croissants, pains au chocolat, etc.) as well as a refrigerated unit with sandwiches and cold drinks.

Service is friendly and the atmosphere is fairly relaxed (they were playing some Nick Cave on my visit). A couple were sitting at the couch by the door with their bicycles, though being quite small the place fills up easily.