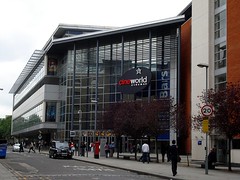 Cinema at the top of the Isle of Dogs, between Westferry Station and West India Quay Station (the former is more reliable because of the limited service to the latter).

This is a modern glass-and-steel building with 10 screens. The lobby of the building contains only information screens and a number of box office positions, which are always manned, and from which all tickets must be bought. There are also a few automated ticket machines, and some upholstered benches for waiting.

Five of the cinemas are on the first floor, and the other five are on the third floor. In between is a licensed bar area which looks perfectly comfortable although with a fairly limited range of beer available. All the cinema auditoriums are square black boxes with raked seating and comfortable seats. Each of them conforms to a basic pattern, with a number of rows in the 'stalls' to the front of the entry level, with spaces left free in the back row of this block to accommodate wheelchairs. Further seating rises above, with a bar along the front of the first row of the raked seating which is good for those looking to rest their legs.

This is a good quality, functional modern cinema which plays a range of releases, both mainstream as well as the more arthouse end of the Cineworld offerings. Generally if the chain is exhibiting any film (except for specialist titles), it will make it to this cinema.