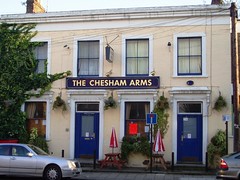 Run by the same people as Charles Dickens, SE1 0LH, according to an advert in the April/May 2008 London Drinker magazine. The same advert claims "an ever-changing selection of up to six real ales will be available from microbreweries", and says that the quiz night is every Tuesday.

There are two rooms inside, one on either side of the bar. One table has a couple of leather couches, and there's another couch alongside the wall. A few more tables are scattered between the two rooms, and there's a pool table.

On a visit in October 2008, there were indeed two sets of three handpulls, though only two of the six were on (Owd Fool, and Brakspear Bitter, £2.60/pint). Another handpull had an Adnam's Bitter label, but it was turned around (the landlord appeared to be changing the barrel). Service was on the whole perfectly friendly.