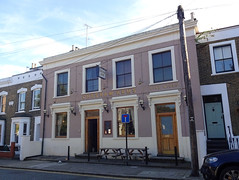 Pub on the border of Hackney and Homerton, roughly equidistant between Homerton Station and Hackney Central Station. It reopened in June 2015 after nearly three years' closure and a lengthy local campaign to stop a property developer converting it into flats. (See earlier version of this page for a description pre-closure.)

It's clear from the interior that it was once two rooms, but these have now been knocked into one, giving a open space around the curve of the bar. Seating is primarily on low backless stools, but there are also a few upright chairs. A dozen stools lined up along the bar complete the arrangements. A door at the back leads to a small covered area of decking, with steps down to a patio and a walled-in grassy beer garden.

The decor is traditional without being dated: dark varnished floorboards covered here and there with patterned rugs, exposed brickwork with iron stoves in the original fireplace spaces, old mirrors advertising Branston pickle, and a piano in one corner with its lid stacked high with board games.

Kake visited on a Wednesday early evening in September 2016. There were three or four other customers in when I arrived around 4:30pm, and several more turned up while I was there. Instrumental jazz was playing, not too loud. Service was friendly and welcoming.

According to their website as of September 2016, they are child friendly and dog friendly.