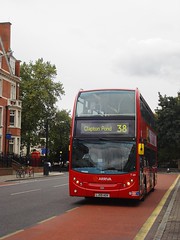 Pubs on the crawl, in order (view them on a map):

Comment added by Anonymous: Your guide was an excellent starting point for our planning. Thanks!