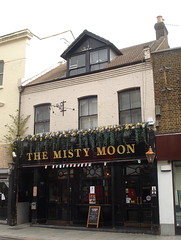 According to the 2015 Good Beer Guide, it was previously a Wetherspoons but is now a free house. Signs of its past still remain.

The pub is long and narrow, leading to a small open area surrounding a pool table and opening onto a patio area. Two dartboards offer additional entertainment opportunities. A couple of large arched skylights ensure that the middle and back of the pub are well-lit; the front is dimmer and rather more Wetherspoonsy due to the low ceiling.

Other hints of the pub's past life as a Wetherspoons can be seen in the old pictures and local history information on the walls. Following the historical theme, shelves at the back hold bound volumes of the London Gazette from the 1940s to the 1960s. Decor is traditional, with a patterned carpet, upright chairs and tables, and a line of tall stools at the bar.

Kake visited on a Thursday lunchtime in September 2014. There was only one other customer at 12:30pm, clearly a regular, though more arrived while I was there and by the time I left 20 minutes later there were half a dozen. Fifties and Sixties music was playing, not too loud, and the flatscreens were showing sports news with the sound off.

According to a notice seen on this visit, there's an open mic session on Sundays from 8:30pm. According to the 2015 Good Beer Guide, there's also occasional live music on Saturdays.