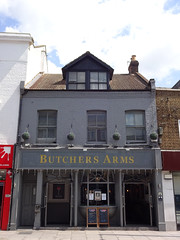 Pub in High Barnet. It was previously known as the Misty Moon (see earlier version of this page), but according to the Apr/May 2016 London Drinker it was refurbished and renamed in early 2016.

It's long and narrow, stretching back a surprisingly long way from the street frontage. A couple of large arched skylights ensure that the middle and back of the pub are well-lit, while lighting elsewhere is provided by recessed spotlights. Decor is in shades of purple, green, and grey.

There's a variety of seating; curved banquettes near the front give way to a line of stools along the bar, followed by freestanding chairs and tables further in. It opens out at the very back into a darts area with three dartboards; one of them with an open oche, but the other two above tables so presumably only used when nobody's sitting there. Finally, beyond this is a patio-style beer garden with picnic tables and parasols.

Kake visited on a Wednesday early afternoon in May 2017. There were a couple of other customers in when I arrived around 1:30pm. The flatscreens were initially showing the news with the sound on, not too loud, but at 2pm the sound was turned up annoyingly loud for a football match.

According to their Facebook page as of May 2017, they have an open mic night. It's not clear whether they do any food.