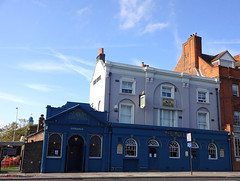 Young's pub in Streatham. It was previously called the Pied Bull (see older version of this page), but changed its name to the Bull after a substantial refurbishment around 2015.

It's a fairly open-feeling interior despite the several sturdy pillars that break up the space. Interest is added by exposed brickwork, geometric tiled panels along the wooden bar, and a feature wall papered in an incongruously-gilted triangle pattern. Another interesting but incongruous aspect is the unfinished nature of the brick archway providing staff access between the two sides of the bar. A muted colour scheme provides a unifying factor, along with the lightly-scuffed wooden boards underfoot.

The rear bar has been converted to a dining area where one must wait to be seated, but the same menu is served throughout, and they'll also do table service for food in the main part of the pub if you want. At the side of the pub is an extensive part-covered beer garden photo.

Kake visited on a Tuesday lunchtime in October 2018. I was the only customer when I arrived at their opening time of noon, but a couple more turned up while I was there. Music was playing, not too loud, but some of it perhaps a little too perky for the time of day. The handpumps were clipped for Young's Special and Ordinary and Sambrook's Pumphouse. A pint of lime and soda was £1.95.

In October 2018, Kake's crushed avocado, goat's cheese, chilli, and poached eggs on toasted sourdough (£9) photo was pretty good. The bread had a good crumb and crust, though the sourdough flavour was relatively mild. The eggs were poached properly, with lovely runny yolks, and the avocado was ripe and well-seasoned. I did wish there had been a little more goat cheese, as it was overwhelmed by the amount of avocado. The chilli was also undetectable except visually via a few red flecks and indirectly via a rather unnecessary sweetness that presumably came from the use of sweet chilli sauce.

They have free WiFi that doesn't require registration.

Accessibility: A small step to get in, around an inch. Another small step to the back part where there are three unisex toilet cubicles including an accessible one with baby change. Other toilets are up at least one flight of stairs.