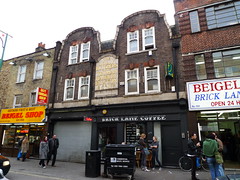 Brick Lane Coffee was a coffee shop at the top of Brick Lane. According to Google Street View, it closed down by May 2017.

A coffee shop at the top of Brick Lane, previously called Coffee@157 (and part of what was a small chain, which seems to have folded as of 2009). Apart from the name change, it looks to be just the same.

It is sited in a former pub, as is clear from the outside, with its bright gold letters proclaiming 'The Jolly Butchers'. However, there's little inside to bear this out, though it's brightly painted and pleasant enough. There are recycled leather couches in an relaxing area up a few steps at the back, as well as a line of small square tables near the front just past the counter, where more than one customer was engrossed on their laptop computer.

Coffee is good quality, and there's a selection of pastries and cakes. Ewan had a slice of Stollen which was perfectly nice.