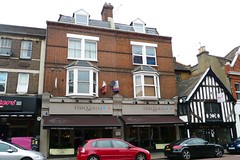 Fish and meat restaurant in Croydon. It's the third restaurant in Malcom John's expanding empire (the others being Le Vacherin and Le Cassoulet). This one is a very much more relaxed affair than the others; your menu is your place mat, for example. The food has a French influence, and the menu basically consists of fish dishes and grilled meats.

bob, elvum, Martin, Northern Steve, and Bethan visited on a Thursday evening in April 2009. While the restaurant was moderately busy, they easily found a table for us.

bob had the yellowfin tuna tartare (£8.25) to start. It was made of good quality tuna, but I felt it lacked flavour. There was wasabi on the side but not nearly enough for my taste (that may just be me, though). For my main I had the cassoulet with octopus and ham hock (£12). This was really good; the octopus was succulent and tender, and the ham hock was pretty good too. A side order of sprouting broccoli (£3.50) was fine. Apple crumble (£6) to follow was adequate.

The wines we had were fine. They offer several by the glass or carafe. We were brought two large jugs of tap water without any fuss.

Accessibility: Toilets are down a step. No obvious sign of disabled toilets.