Blog
Contact
About
(redirected from Books For Amnesty, W6 9JG) 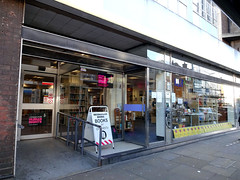 It was originally at 139b King Street photo, but was forced to close in January 2015 due to redevelopment of the site. In October 2015, Hammersmith and Fulham Council announced that the bookshop would reopen in temporary premises at 181 King Street, until it could find a permanent home.

The new premises are much more spacious than the old, almost to the point of feeling sparsely-filled. However, the freestanding bookshelves are well-stocked with fiction and non-fiction, with sections including reference, social sciences, natural history and other sciences, religion, cookery, travel, and foreign languages. There's also a dedicated children's section photo.

Accessibility: An automatic door and a shallow ramp to get in. There's plenty of space between the bookshelves once you're in. The bookshelves are mostly full-height.