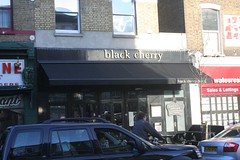 Black Cherry Bar was a bar/restaurant on Lordship Lane in [East Dulwich]?. It has now closed.

Between May 2012 and Dec 2013 it was a branch of the Draft House pub chain. It is now being converted into an Italian restaurant.