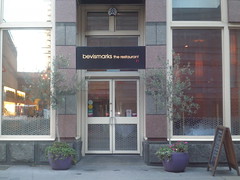 Kosher restaurant in the City of London, between Liverpool Street Station and Aldgate Station. Previously located at the end of a small courtyard off Bevis Marks itself photo, it has now moved to a new location on Middlesex Street.

Ewan and Kerry visited the old location in February 2010. Music was playing, not too loudly, though it was of the rather bland smooth jazz variety (think Kenny G). The service was attentive, friendly and sober without being overly fussy or obtrusive.

The restaurant serves a range of starters, mains and desserts at City prices photo of menu in July 2010, preparing its food according to the strict laws of the kashrut, which means for example that no dairy is served alongside meat, amongst other things. However, as a non-Jew, Ewan did not notice any particular lack in either the presentation or the flavours of his food.

Bread was offered at the start of the meal, a perfectly reasonable chunky wholemeal bread, and served with (non-dairy) spread. The starters were probably the highlight of our meal. Ewan's carpaccio of rare roast beef with rocket and horseradish vinaigrette (£9.50) was attractively presented, and the meat was (for the most part) rare and tender, offset nicely by the vinaigrette and rocket. Kerry's crunchy radish and watermelon salad with spring onion and herb dressing (£8) also gained a warm reception.

The mains, then, were somewhat of a let-down by comparison. Although Ewan's blackened cod with Asian spiced noodle broth (£21) was fresh and full of flavour, Kerry's confit duck served with aubergine rice, fine beans and a redcurrant jus (£20.50) was very overcooked, leaving the duck dry and very chewy.

Special mention should go to the wine list, from which the Israeli cabernet merlot (the house wine at £24 a bottle), was just as fruity and easy-to-drink as could be expected, and a fine complement to the meal.