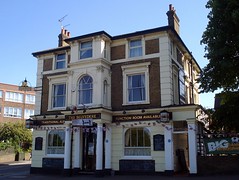 Pub at the bottom of the rather steep Picardy Road toward Upper Belvedere, also very handy for the bus stop toward Bexleyheath.

It's fairly small inside, and some of the space is taken up by a pool table. There's also a dart board. There's a small but decent enough beer garden, with grass and shrubbery, and although there's a fair bit of traffic noise out there, the pub is set back from the main road so it's not too bad.

Kake visited on a Wednesday afternoon in April 2011. There were two real ales on: Bombardier (£1/half) and Ruddles Best. The Bombardier was sour, but they immediately exchanged it for a half of Ruddles. There were around half a dozen other people in.

As of April 2011 they serve food at lunchtimes, at least.

gellyfish's verdict: A friendly locals' pub. It has a pool table and an active darts team so can get rather crowded when both of these activities are taking place.

Accessibility: A step to get in, and a couple more steps to the beer garden. Once you're in, there's level access to the bar, interior seating, pool table, and ladies'.