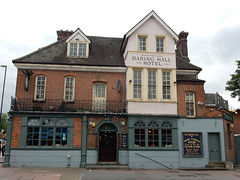 The Baring Hall Hotel was an Antic pub in Grove Park. According to the Aug/Sep 2021 London Drinker, it has closed and its future is "uncertain".

It's quite large, but dividing walls have been left in place to separate it into several areas, saving it from seeming too cavernous. Varnished floorboards are underfoot, and various pillars, beams, and ceiling sections have been left unfinished. There's a fairly basic beer garden out the back, consisting of several picnic benches on a patio adjoining a car park.

Antic's trademark quirkiness isn't too heavy-handed here, though there are a few touches of it: menus clipped to old vinyl record sleeves, a stuffed squirrel in a glass case, and a sort of old-fashioned parlour arrangement in the ladies' photo.

Kake visited on a Friday early evening in September 2015. I arrived just after the opening time of 4pm, along with about half a dozen other customers, including a child. People continued to arrive, and by 4:30pm it was quite lively. Music was playing, not too loud.

There are two banks of handpumps on the bar, but the clips were doubled up. The real ales were Sharp's Doom Bar, King Beer Elixir #1, Southwark Bermondsey Best (1.85/half), and Volden Vim, and there was one real cider: Seacider Strawberry.

According to a notice seen in September 2015, quiz night is Tuesday from 8pm.

Accessibility: Two steps to get in. No steps to the ladies' once you're in, though there is at least one small step to the gents'. A step down and three steps up to the beer garden.