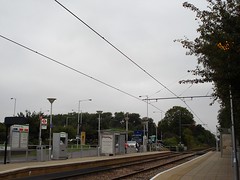 Tram stop on Tramlink Routes 3 and 4.

According to the Wikipedia entry linked below, the reason for the name of this stop is its proximity to the former Croydon Power Station; not sure if this is true, since there is an actual street called Ampere Way running alongside the tram tracks here (of course this street could have been named for the power station).