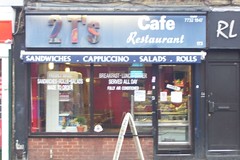 Veggie set meal for £3.90 including coffee or tea consists of two hashbrowns, mushrooms, toast (only one slice, rather mean I thought), beans, scrambled egg, and tomatoes (tinned). Photo [here].

It was tasty and cheap, though I do think toast should be two slices. I replaced my mushrooms with extra tomatoes, but I wish I'd asked for chips instead. Oh well. Live and learn.

This review also appears on the London Breakfast community.