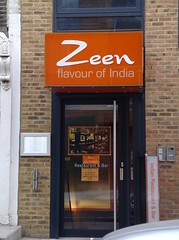 Zeen was an Indian restaurant in a basement on Drummond Street. It has now closed. As of August 2013 the premises (along with those previously belonging to Royal Sweets) were occupied by another restaurant called Taste Of India photo. As of November 2015 they're occupied by Laksa King photo.

Yet another Indian restaurant on Drummond Street.

bob, Dean and Richard visited early on a Monday evening in April 2009. The restaurant is in the basement. There might be a lift for disabled access. The restaurant is very orange as is the menu. bob was rebuked by a quite surly waitress for taking photos of the menu. A couple of minutes later she came back slightly more contrite and tried to explain their policy. Obviously she had realised that being rude to customers isn't the best choice for tips and indeed continued business. We were close to walking out.

The food was really quite good. The starters were all quite good at about £3.50 each. All our mains were very tasty. Rice and naans were all pretty good as well. Our bill came to £20 a head with no service charge being added.