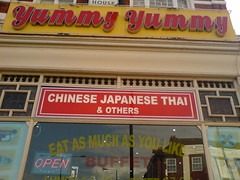 This was a Chinese buffet on the Old Kent Road. It closed some time in 2011. As of July 2011, the premises are in preparation to reopen as a steakhouse called KTA Steak House photo.

The information below is retained for people who want to know what it used to be like as Yummy Yummy.

A Chinese buffet place near the Dun Cow on Old Kent Road.

The signage outside advertises Chinese, Japanese and Thai food, but on secretlondon's lunchtime visit all the food was Chinese.

It costs £5.49 for lunch and £7.99 for dinner in the evening. They charge less for a takeaway box but more if it is overful. Children pay less if they are under a certain height (which is marked on the wall). They charge extra for 'wasteage'. The costs go up on Saturdays, Sundays, Bank Holidays and Valentines Day too.

secretlondon went in one weekday lunchtime in January 2009. She paid £5.49, plus £1 for a pot of Chinese tea. They had been open an hour and much of the food was cold. They had a variety including tofu and other things for vegetarians.

There was Chinese TV on but with poor reception. The interference was being played through speakers. They seem to be licenced.

Accessibility: Stairs to the entrance. Didn't investigate the toilets.