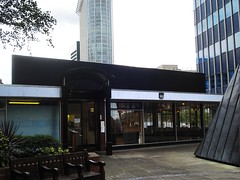 Young Bean was a Korean restaurant on the Barbican highwalks near to the Guildhall. It was formerly located on St Alphage Highwalk photo, but moved to Bassishaw Highwalk in mid 2008 due to the impending demolition of St Alphage Highwalk and everything on it. It closed down some time after that, and these premises were also demolished by mid-2014.

When bob, Adam, Dean and others visited the old location in August 2007, the kimchi was very good, as was the chilli pork on the Korean barbecue. bob the wasabi fiend was disappointed to see that the sushi didn't come with extra wasabi on the side, but thought the nigiri almost had enough wasabi anyway (which might mean it has too much for normal people...).

They do an all you can eat buffet at lunchtime, which is kept warm using bain-marie style dishes built into the central counter top. Billy has noted that this is not always as effective as it could be, and the food sometimes goes a bit cold. However, other than that the selection is good (covering things from sweet and sour chicken to kimchi, with hot and cold dishes) and quality is not bad at all. They also offer the buffet as a takeaway, giving you a fairly generously sized box. As of mid-2009 it's about £9 for eat-in and less for takeaway.

They have an a la carte menu with choices of sushi and more traditional Korean food including bibimbap. This is served at lunchtime and also in the evening.