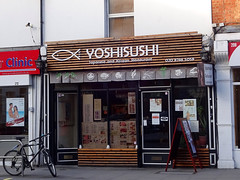 Japanese restaurant on King Street in Hammersmith, just around the corner from Ravenscourt Park Station. It has a proper sushi bar (with four or five spaces) down at the front, and a "take your shoes off and sit on the floor" area at the back (this may only be available to pre-booked groups, not sure). They also offer some Korean food.

Kake used to be a great fan of this place when living in the area a few years ago, but my two most recent visits were both disappointing. In early 2007 we had a somewhat incompetent (or nervous?) waitress - first she spilled some of the wine when she was pouring it and then she knocked my miso soup all over the table. I don't remember the food being spectacular either, though I am writing this at a year's distance.

On our April 2008 visit, my main course arrived just as I was beginning my starter (decent enough agedashi tofu) and before bob even had his starter; and although I'd ordered the superior sushi selection I didn't get anything exciting, just the usual tuna, salmon, cooked prawn, eel, etc. The eel was cold, too. I did like that the nigiri weren't too big, though; often in London you get such enormous bricks of rice that it's a struggle to get them in your mouth, so I've got used to taking two bites to eat them, but these were manageable in one bite. Fish portion was generous in proportion to the rice, and not excessively so.

Bob was disappointed by both his starter of belly pork (basically a plate of bacon and onions) and his main course of shabu shabu; the vegetables were uninteresting and he didn't even get to drink the broth at the end - they just took the whole thing away.