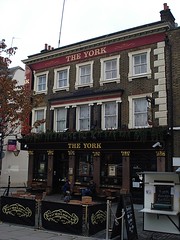 As of October 2007, breakfast is served 10am-noon every day, and a full menu noon-10pm every day. Bob thought the food was OK; generous portions at an acceptable price. They do a filled Yorkshire pudding. Sunday roast is £8.

It is (at least sometimes) possible to book tables.

Accessibility: Not sure about steps to get in. There's an accessible toilet but there's a step to get to it.