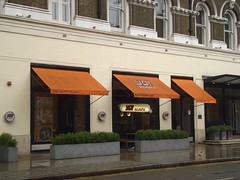 Now closed; used to be a Yo Sushi branch in the MyHotel just off Tottenham Court Road.

Yo Sushi branch just off Tottenham Court Road, in the same building as the MyHotel, but a separate establishment open to the public.

The restaurant has the usual conveyor belt stretching down the middle of the room and widening near the door, where tall seats are placed for individual diners and couples. The bulk of the seating comprises four booths for four people each on either side of the belt. As usual, condiments and still/sparkling water taps are provided at each table. Service is prompt and friendly.

On Ewan's visit, they were holding a special January 2009 offer with 40% off all conveyor-belt dishes. There was a reasonable selection of both nigiri, sushi and sashimi (though no plates of the four small sushi, just two large ones). The latter included one with avocado and cucumber, which comes with mayonnaise in it as well. Tofu on a bed of salad leaves was tasty, as were the pumpkin korroke (croquettes).

In all, a satisfying meal, particularly with the special offer.