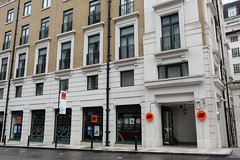 Yo Sushi branch near BFI Southbank and Waterloo Station. They also do takeaway, and you can order online via their website (for pick-up only, not delivery).

Kake ordered a takeaway delivery on a Saturday evening in July 2010 (note however that as of July 2012 they no longer offer delivery). The food arrived well within the promised hour. Hamachi sashimi (£5) was fine, and the slices were nice and thick. Yakisoba with prawns (£5) was OK. Presumably the reason there were only two prawns was to keep the price down, which is fair enough, and the prawns were nice big ones with the shells still on. The vegetables were cut a bit randomly, though, and the pieces were small and square and not ideal for eating with chopsticks. Kaiso salad (mixed seafood salad; £2.20) had a nice mixture of textures, and although the carrot pieces were again a bit haphazardly cut, they were at least a suitable shape for picking up with chopsticks — the edamame promised on the menu description were absent, though, and the dressing was a little sweet for my taste.

The futomaki (large rolls) in the "roll box" (£7 for eight pieces) were a bit mixed in terms of quality. The rice was generally underseasoned. The best of the lot was probably the spicy chicken katsu, which had a nice bit of heat and crunch. The promised miso in the crispy duck roll was absent, and the duck wasn't shredded and didn't include any fat/skin, so I wouldn't have described it as "crispy duck" in the sense that you might expect. It was just a bit boring, really. The tobiko on the outside of the "Yo! roll" had disintegrated into an orange stain. Finally, the avocado pieces in the california roll were mushy, greyish, off-tasting, and in my opinion not really fit to be eaten.

Kake previously visited in person on a Monday evening in January 2007, in the company of doop. In comparison with other Yo Sushi branches I've been to, the decor of this one seemed rather more basic. The “waiter call” button on the table was either broken or switched off, and the whole place just looked a bit shabby (do note though that the place had a refurb in early 2010, and hopefully looks a bit better now). There were no menus on the tables, and when I asked what wine they had, I was told that there was a single bottle of Shiraz left in the entire place (so I ordered it). The conveyor belt selection was fairly decent for a Yo Sushi, though. We were here around 8:30pm, and it wasn't too busy but wasn't empty either.

Kake's verdict: I thought I might as well give them a chance, but they weren't really significantly better than Poppy Hana, which is right at the end of my street (and doesn't slap on a £3 delivery charge), so I probably won't bother again.