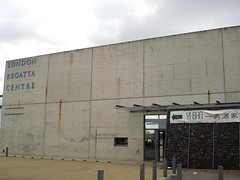 Situated way out on the Beckton branch of the DLR, it perhaps doesn't have the most convenient location. However, the large plate-glass windows of the dining room do offer an excellent view of the docks themselves, as well as the planes at the airport and the trains running along the Woolwich Arsenal DLR branch. (The photo on this page illustrates the actual entrance, which is round the other side of the building and rather less attractive.)

They do dim sum until mid-afternoon every day. Dim sum ordering is via a sort of computer input form thingy, which you need to fill in by shading in the little boxes. The names of the dishes on this are in Chinese only, but there are numbers to let you cross-reference with the bilingual picture menu.

Kake and friends first visited for dim sum on a Friday lunchtime in August 2010. We hadn't booked, but there was no problem finding us a table when we arrived at 1pm; indeed, the six of us felt quite spread-out around a circular table which could easily have seated another three or four. On another visit on a Sunday afternoon in July 2013, we'd booked a table for our party of ten, and were glad we had, as the place was quite full.

In August 2010, lean pork and century egg congee (£3.80) had a pleasingly clean taste and a light, non-stodgy texture. The pork was tender and the century eggs not sulphurous at all. Fresh spring onions and shredded ginger gave added interest, and a fried doughstick came on the side for a nice textural contrast. Char siu pastries (£2.30) were served warm rather than hot, though not cold enough to be claggy. The pastry itself was a little too sweet for Kake's taste, though the filling was fine.

Prawn cheung fun (£3.80) were fine; competent enough without being outstanding. Paper-wrapped prawns (£3) were nice and juicy, and the wrappings weren't greasy at all. Vegetarian spring rolls (£2.30) featured still-crisp slivers of vegetables in a thickish sauce, enclosed in slightly greasy but nicely crispy wrappers.

Chicken feet in black bean sauce (£2.30) were nicely-flavoured and had sufficiently-softened cartilage. Glutinous rice in lotus leaf (£3.20 for two packages) was fine, with a nice balance of rice to filling. The chicken wasn't on the bone. We also tried a few types of steamed dumplings, which were properly seasoned and generally quite competent.

They don't have a tea menu, but when we asked they admitted to having tieguanyin, which was fine.

As of August 2010, their website advertises "live smooth jazz" every Friday and Saturday evening.

Child-friendliness: On both our visits, the toddlers in our parties were made welcome, and there were several other children present too. They don't have any actual highchairs, but they do have highchair attachments which hook onto normal chairs. There's a combined accessible toilet and baby change room (with pull-down changing table with strap) on the same floor as the restaurant, though for baby-change purposes there's a distinct lack of useful flat surfaces to put your nappy accountrements on.

Accessibility: There's a large free car park. Access from the car park to the lobby is step-free. The restaurant itself is on the first floor, but there's a lift (which fits at least two adults and a pushchair). Toilets are on the same level as the restaurant, with no intervening steps (including an accessible one that doubles as a baby-change room).

Getting here: The most convenient station is Royal Albert DLR, on the Beckton branch. Head right on coming out of the station, along the road. Just before the road bends round to the left, there's an entrance into the car park — the restaurant entrance is directly through here. Alternatively, go straight forwards towards the water on exiting the station, then turn right and and walk alongside the docks. You'll have to go around the edge of the building when you get there, though, since the only entrance that's usually open is on the carpark side.