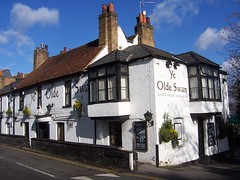 Greene King pub in Thames Ditton. It has a large outdoor seating area with a lovely view of the river.

Kake visited on a Tuesday evening in September 2011. There were quite a lot of customers with dogs, so it appears to be dog-friendly. Music was playing quietly. There were three real ales on: Old Speckled Hen (£3.15/pint), Greene King IPA, and Abbot Ale.

They have free wireless access; you have to register, but when Kake tried this in September 2011 it happily accepted junk registration data.

According to their website as of October 2011, food is served noon-10pm every day photo p1, photo p2. In September 2011, Kake had the aubergine, feta cheese & beetroot cannelloni (£8.29) photo. It wasn't very good. The aubergine was badly undercooked, the tomato sauce was unpleasantly sharp, the pasta was hard and chewy from reheating, and it was topped with a mixture of mint sauce, yoghurt, and cucumber that really didn't fit in with the rest of the dish. (The accompanying garlic ciabatta and mixed salad were both fine though.)

If it hadn't been relatively expensive for pub food, I'd probably have just made do with the salad and ciabatta for the sake of avoiding hassle, but when the waitress came back shortly after delivering the food and asked how it was, I told her the truth — she immediately apologised and offered a refund, which I accepted. Not only did my refund arrive promptly, but the pub manager came over shortly afterwards to apologise again and offer me a hand-made voucher for a free meal on my next visit. Judging by this, and by the list of interesting-looking specials on the wall (such as ham hock terrine and liver & onions), I got the impression that they do care about the food; they're just not very good at vegetarian.

Accessibility: Four steps to get in. Toilets are down a small flight of stairs with a sturdy handrail on one side.