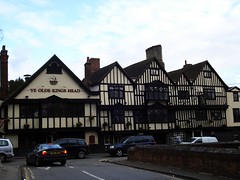 Ye Olde Kings Head was a large Chef & Brewer pub in Chigwell. It closed in 2010, and the premises were converted to a restaurant.

Large Chef & Brewer pub in Chigwell. According to various parts of the interweb, the Kings Head (built in the mid-16th century) was the inspiration for the Maypole pub in Charles Dickens' Barnaby Rudge.

Slightly confusingly, the facade visible in the photo on this page does not provide an entrance to the pub; you have to go around the back through the car park and beer garden.

Kake and James visited late on a Monday afternoon in March 2008. Pretty much nobody else was there, though a couple of solitary blokes did turn up a bit later on. Real ales available were Old Speckled Hen, Greene King IPA, and Bombardier (£2.92/pint). Food looked quite interesting, with a wide choice on including a special menu for St Patrick's Day, but we didn't try it as we had another pub on our list to visit. Would like to come back and try it, though I suspect it's a chain-wide menu rather than specific to the pub.

Decor is quite traditional dining pub style; dark wood, fairly dimly lit, chairs and tables packed in efficiently but not too densely, empty wine bottles on display, geared more to diners than to drinkers. Pot pourri in the ladies'. The more pub-like bit by the bar has an open fire.

They also have a bookable function room.