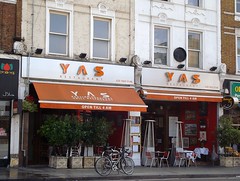 Despite the double frontage, it's relatively small. It seats around 50 people inside, and more outside on the small patio area at the front. They offer shisha photo of shisha menu as of August 2013.

bob and Martin visited in January 2007. The food was a touch bland. The bread was good, though, freshly cooked in a tandoor-like thing at the front of the restaurant.

Kake and Sarah visited again on a Wednesday lunchtime in August 2013. We were the only customers. Music was playing, though not loud enough to impede conversation.

Sabzi paneer (£4) photo came as a plate brimming over with fresh tarragon and mint, spring onions, radishes, walnuts, and fresh white cheese. The herbs and vegetables were perfectly fresh, and the cheese was mild and tasty. It was a little jarring to be charged extra for bread to go with it, though (£2.50) photo.

Mast o esfanaj (spinach with yoghurt; £4) photo had a good balance of spinach to yoghurt, and the overall result was tangy and not at all heavy. Salad-e oliveh (chicken and potato salad; £4.50) photo was fine, and the accompanying gherkins and tomatoes gave a good textural contrast.

While we enjoyed our shared starters, our shared main was disappointing. Khorosh e gheymeh badenjan (lamb, aubergine, and split pea stew; £9.50 including rice) photo was very bland, and the lamb managed to be both dry and flavourless.

Service was efficient, but not particularly welcoming. A 12.5% service charge was added to the bill.

Kake's verdict: Disappointing. I'd be unlikely to come here again, unless I was going to an event at Olympia and didn't have time to walk the extra distance to Mohsen. If I did come back, I'd avoid the stews.

Accessibility: A step to get in, and another step to some of the seating. The toilets are in the basement, down a flight of stairs with a sturdy handrail most (but not all) of the way down.