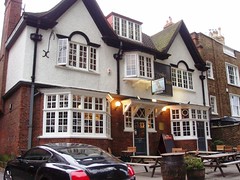 Pub in Highgate with quite some history. A plaque outside explains its place in the famous 'ceremony of the horns' that takes places at several times during the year.

From outside the place looks rather unreconstructedly traditional, and indeed the evidence inside reveals a pub which hasn't caved in to trendy gastro makeover. Its qualities are old-fashioned, but in a good way, with a warm atmosphere. The pub runs quite far back and there are plenty of tables, though even on a Tuesday evening these were mostly all taken. Food and drink are all reasonably-priced for the area.

There are eight handpulls for ale, four on each side of the bar. Beers available on a July 2008 visit were Greene King IPA, London Pride, with guests Bitter and Twisted (£2.90/pint) and Summer Lightning (£2.90/pint). In September 2008, guests were Summer Lightning and a very well-kept Lancaster Blonde (£2.90/pint). Draught beers include Staropramen, Leffe, Bulmers Pear and others. Glasses of wine were consistently around £3.50 (or cheaper for house wine), both red and white. A glass of malbec was very good quality, and served in an attractive glass.

Food is a tapas menu, with dishes ranging from around £3 up to £6.50 for the meat and cheese platters. In September 2008, the menu featured three tortillas (two with chorizo), six fish dishes, some other meat dishes, and vegetarian options (gazpacho, pimientos, stuffed mushrooms and then sides (like bread and olives). Ewan tried the pimientos de padron, a plate of chilis, not too hot but lightly cooked. The spinach and cheese tortilla (£3.50) was a tasty dish, filled with cheese and potato.

Verdict: Ewan would definitely return. This is one of the better Highgate pubs, a welcoming and friendly place where the drinks are well-kept, well-chosen and competitively priced.