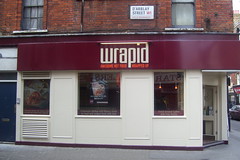 Another competitor in the busy Soho lunchtime market, which has now closed (after only a few months of being around).

Wrapid has apparently come to London from its original base in Leeds. Their gimmick is to serve all their food in wraps, as you might expect from the name of the place. This includes pizza wrap, noodle wrap, curry wrap (a naan bread wrap, apparently), as well as the more usual things you might expect.

The quality is perfectly good. Ewan's pizza wrap was tasty, though the wrap itself was quite solid, and the prices are competitive enough. There are a few seats for eating in, but the focus is on the takeaway crowd.