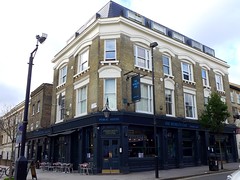 The World's End is a fairly large Victorian pub at the opposite end of Stroud Green Road to the Old Dairy, and very convenient for Finbury Park underground and mainline stations.

Until late 2007 this was a rather unassuming Barracuda chain pub, and had gained something of a bad reputation locally; however, a complete refurbishment and change of ownership has improved the place significantly. The pub is now owned by a much smaller group known as the Capital Pub Company, and is run with far more attention to detail. The refurbishment is not revolutionary, but has been smartly done and accentuates the original Victorian decor. There are essentially four different spaces around a central bar ranging from the relatively small front bar to the large, more ornate, saloon bar at the back. The pub is mainly furnished with tables and mix n match chairs, with some armchairs and booths in the side bar. There is also some outdoor seating on the pavement along Lennox Road.

An extensive selection of beer on tap usually includes at least two less commonplace continental lagers (Bitburger and Paulaner) on top of the usual suspects, and at least three cask beers (Adnams and Bombardier).

Food is served from noon-3pm and 6pm-9:30pm Monday to Saturday, and from 12:30pm-8pm Sunday. The menu is fairly good, the food freshly prepared and not bad value for money either.

There is now live music in the back saloon bar every Thursday and Sunday nights, and often a DJ on Saturdays. Major sporting events, including all broadcasted Arsenal fixtures (when the pub can get quite busy due to its proximity to the Emirates Stadium) are shown on plasma screens and on a large projection.