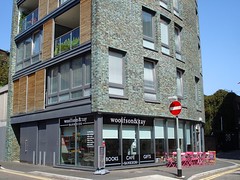 Woolfson & Tay was an independent bookshop near Southwark Station. It closed for good in late January 2014.

Independent bookshop near Southwark Station. Previously at Bermondsey Square photo, it relocated to Bankside in April 2013.

Note: Sadly, as of December 2013, Woolfson & Tay have announced that they will be closing down in the New Year.

The stock is a carefully-curated selection of fiction and non-fiction photo, including children's books and an international section.

There's also a cafe area photo, which serves coffee and cakes, plus Asian lunches on weekdays.

Accessibility: No step to get in (just a small ridge at the threshold), and it's step-free throughout.