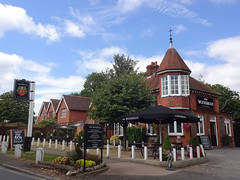 Pub in Woodmansterne (although its website claims it's in Banstead).

Although somewhat off the beaten track, it's a pleasant enough walk from Woodmansterne Station (as long as you don't mind hills — the 166 bus stops just round the corner if you do).

Entry is into a wood-floored space with high tables and chairs; further in is a carpeted area with normal chairs and tables. Out the back, there's a covered patio with more seating and a BBQ station including a small bar with a couple of keg taps. Beyond this is a large grassy beer garden, with a sandpit for children and a notice indicating that a bouncy castle is sometimes present.

Kake visited on a Wednesday lunchtime in August 2016. There were a fair few people in when I arrived around 12:30pm, several of them children, and many of them having lunch. Music was playing, veering between interesting and cheesy, not too loud. Service was friendly.

Food is served all day including breakfasts at weekends. In August 2016, Kake tried the vegetarian tart of the day (£9.19 including vegetables or salad), which on that day was red onion tart. This initially looked good photo, but the tart was really disappointing — it turned out to be a small pile of caramelised onions with a puff pastry circle popped on top photo. The onions were OK, but it wasn't a cohesive dish at all. The accompanying vegetables consisted of spring greens, carrots, and, for some reason, a single pea. The spring greens were good, cooked just to tenderness. The carrots were very haphazardly cut into batons, and there were a few round slices in there too, very clearly from a different variety of carrot. The pea was fine.

They have free WiFi via The Cloud, which requires registration but doesn't check whether you've used your real email address. A sign states that customers are welcome to charge phones and laptops. According to a sign in the garden in August 2016, dogs are welcome but must be kept on a lead.

Kake's verdict: The food was disappointing, but I'd come back if I was with children who'd appreciate the sandpit.

Accessibility: An uneven surface on the approach to the door, and then two steps to get in. There are more internal steps between different areas, and two steps to the garden. The pub has its own car park.