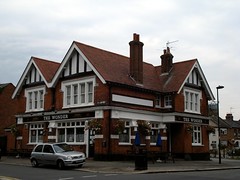 McMullen pub in Enfield Town. Traditional old man's pub kind of style. It has separate lounge and public bars; the lounge bar is really quite small, but (judging from the outside at least) the public bar is rather larger. The two bars are totally separate with no way through except by going back outside.

Kake visited on a Monday afternoon in October and sat in the lounge bar. The place was quite lively for 3:30pm on a Monday. No piped music. There were four McMullen's ales on: 180, Country Bitter, Cask Ale, and AK. The 180 was £1.21 for half a pint.

The 2008 Good Beer Guide says they don't do food any more.